ULI’s Nob Hill property is centrally located less than five minutes from the Capitol Square and only 15 minutes from the Dane County regional airport.  With a full service intersection between the Beltline Highway and Rimrock Road just three blocks away, the location is equally accessible from all parts of Madison and removed from much of the traffic congestion that occurs further to the west.  What truly differentiates the Nob Hill property from other office sites available in Madison is the character of its topography. Wrapping around Nob Hill, which is one of the highest and most prominent elevations in Madison, the site has an extraordinary quality of heavily wooded natural environment. To the south the property is buffered and protected by 21 acres of permanent open space that is zoned conservancy, which will likely never be developed.  The slopes of Nob Hill will be maintained as open space.  To the east of Nob Hill, permanent open space zoned conservancy protects the site from encroaching development.

This property offers a great opportunity for a Built-to-Suit corporate headquarters with a location situated around an existing pond that can be expanded and developed into a defining feature.  Future buildings will be designed to become part of the distinctive natural landscape. The Nob Hill property provides a rare opportunity for a tenant to create a corporate headquarters in the middle of a stunning park-like setting near the heart of Downtown Madison. 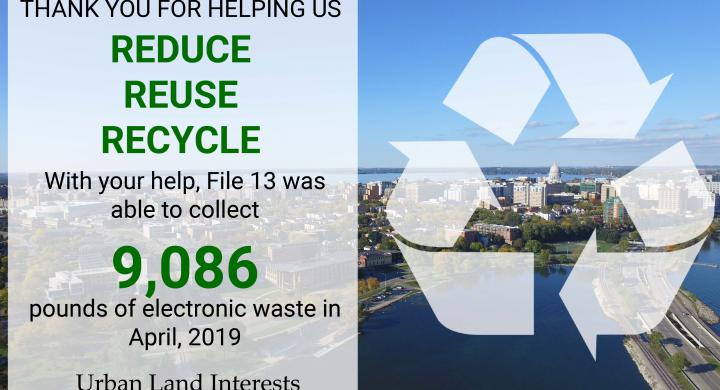 2019 Electronic Recycling Drive
For the ninth year in a row, Urban Land Interests has partnered with File 13 to conduct an e-waste recycle drive for all of our commercial and retail
Read More

Downtown Madison - Window Decorating Competition
The holiday season is finally here, and Shine on Madison is helping downtown celebrate in style! On November 17th at 6:08PM, during the Madison Night Market’s
Read More